A Deserted Utopian Village in a New Jersey Fores 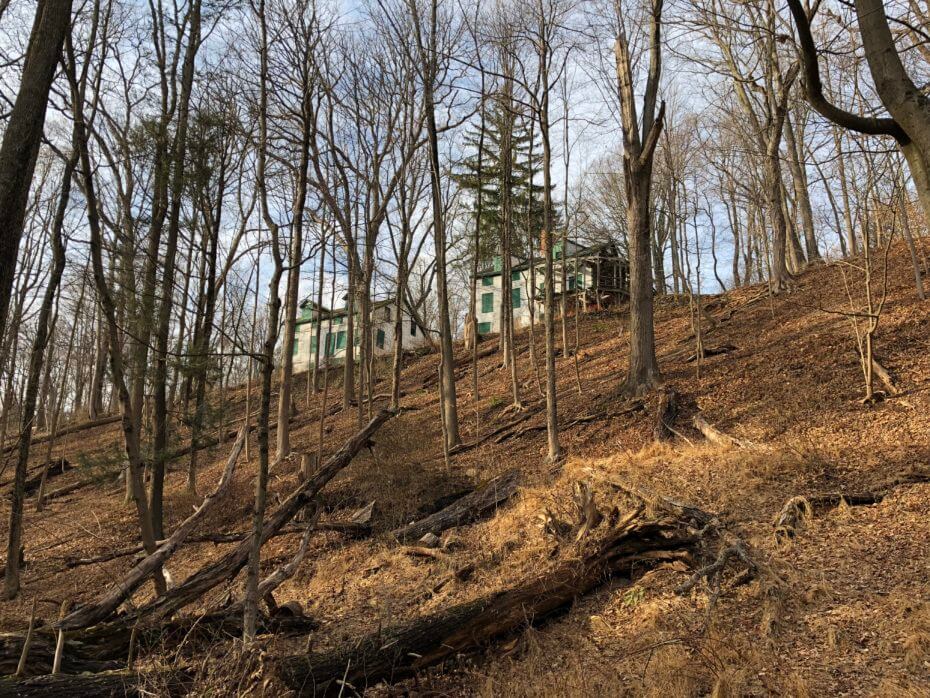 If you were to look at Google Maps and search for the Watchung Reservation in New Jersey, you will discover something quite peculiar; the map will show a forest, marked with a lake, nature trails and a brook. But move in closer and you will find something on the map to capture the imagination; it simply says ‘The Deserted Village’. This deserted village was once known by another name, Feltville. It was a quasi-utopian company town created in the middle of a peaceful forest, miles from any other farms or villages.

About four miles southwest of Summit…lies the deserted village of Feltville, in the midst of nearly eight hundred acres of meadow, orchard and woodland….The place…fell little by little into the melancholy state of ruin in which it is today. It requires a strong effort to realize that the now silent and grass-grown streets, the ruined mill and the windowless houses were once filled with busy life…..The store is standing empty with empty shelved and counters, but the wooden steps outside where the male gossips of the village were wont to gather of summer evenings have vanished. Incredibly, this melancholic scene was written in 1882. We went into the woods to explore this abandoned little village, to discover that little had changed since that article was written 135 years ago. Heading deeper into the secluded forest, we discovered an old village cemetery, mysterious deaths, haunting ruins, secret murals, and incredibly, someone who was still living amongst it all. David Felt was a successful stationer and paper merchant, with offices in New York and New Orleans. In 1845, he bought a tract of land in the middle what is today known as Watchung Reservation. Based on the site on an old Colonial settlement, his dream was to build a self-sufficient manufacturing town. The New York Times recorded: “In the wildest part of this romantic region, David Felt, a New York stationer, purchased a tract of over 600 acres, and began the manufacture of paper. He built two large mills, a dam to retain water from the mountain stream for power, and also erected 24 pretty cottages, a comfortable church and a school house, a handsome dwelling for himself.” Felt had high ideals for his private town; it was to be a far cry from the tenement sweat shops of Manhattan. He advertised for Protestant workers with upstanding morals, who would live and work in the quasi-Utopian village he called Feltville. ‘Not a hint of malaria’, promised Felt, who laid out his village amidst apple and pear orchards, meadows, groves and pastures. Soon enough, somewhere between 175 and 200 people settled in Feltville, in houses built on a bluff, where as one newspaper reported, “one looked down upon the pond, where light rowboats floated among the reflections of green trees and blue sky in the water.”

For about 15 years the village was prosperous. One local newspaper reported of how, “the young folks danced to their hearts’ content in a pretty picnic grove along the stream. The village was several miles removed from other villages….so that the Feltville rustics were happy in their retreat.” Following the same route today from the train station, an hour’s walk leads you to the entrance of the Watchung Reservation and the ghostly ruins of Feltville. The eerie tone of the abandoned village is set as you pass by the remnants of the old cemetery. Home to around two dozen people, it includes the graves of the first English families who settled here in 1736. Today, Feltville is looked after by the Parks Department of Union County, New Jersey, and a dedicated group who have been trying to preserve this peculiar little village lost in the woods. Plaques through the village tell the story of what happened here, but almost all the buildings still surviving are crumbling away. One of the best preserved structures is the Feltville church which doubled as the village store. One of David Felt’s conditions on living in his utopian village was the compulsory attending of church once a week. Past the old church, more ruins can be seen, sprinkled throughout the forest, on roads long overgrown with weeds. These were the homes for Felt’s workers. The two floored, modest buildings housed two families side by side, with two small rooms on each floor. At first, Feltville thrived, and Felt himself was said to rule over the village with a firm but stern hand; the villagers called him ‘King David’. Today, the old homes are gradually falling apart. Felt’s grand experiment failed to survive the economic Panic of 1857, he was declared bankrupt by 1868, dying just five years later. Once his paper business failed, there was little to keep the families in Feltville. The village almost entirely abandoned by 1870, and became known locally as ‘The Deserted Village.’ By 1882, the land was put up for auction, The New York Times reported

“decay and desolation began to be seen on all sides. The busy whirl of machinery resounded in the mills no more, and in place of the former bustle and activity there was silence, gloom and decay. Even the tramps kept clear……the place was deserted, except by the rats and spiders.” In the late 19th century, Feltville was given a new, but all too brief lease of life, when budding entrepreneur Warren Ackerman bought the village, rechristening it ‘Glenside Park’. He built sun porches on the old homes and added tennis courts, advertising the village as a Victorian Summer Resort. But the project failed in 1916, dooming Feltville once more to decades of neglect and abandonment. The mill, which had once been the centre of Felt’s book binding and paper factory became unstable and was eventually torn down in 1930;  today only partial ruins remain. The property was eventually bought by the Union County Parks Commission, who have worked to restore the old church, with the help of the New Jersey Historic Trust. But presumably funding is hard to come by, and most of the buildings still standing are in advanced state of decay.

One particular home, Number 7 is desperately in need of saving. For inside is an incredible secret; covering the walls is a set of murals more at home in New Mexico than a remote forest in the north east. Today they are faded, but you can tell that they were once, vibrant and beautifully colourful. They are thought to have been painted by Roberto de la Selva around 1920. Born in Nicaragua, de la Selva moved to Mexico in protest of the US military occupation. An eminent folk artist, he was hired by New Jersey engineer Edward Grassmann, who bought up some of the vacant buildings in Feltville with an aim to use them as summer homes. One summer, he arranged for de la Selva to paint the walls of one of his buildings, the Number 7, with a dozen murals. After Grassmann left Feltville, the beautiful murals were covered with wallpaper until they were discovered in 1975. With leaking roofs, and deteriorating walls, the murals future is precarious.

Down past Number 7, is the bluff looking over Blue Brook, and the remains of the Felt’s mill and dam. There had once been two lakes here, but today, there is just one, Lake Surprise. It was here, that one of the darker chapters in Feltville’s life took place; the deaths of two of David Felt’s teenage workers. But incredibly, the village isn’t entirely deserted. There appear to be two of the old worker’s homes still occupied. One near the church, and another further into the forest. Walking past a house, with a porch full of decorative garden sculptures and benches, I came across two cats looking out of an upstairs window, and tending the back garden, a man who introduced himself as Sergei.

“This was an industrial village in the middle of nowhere,” Sergei explained. “That’s what makes it unique. These are the original buildings.” You might expect someone living in an abandoned village to tend towards the cantankerous and hermit like, but Sergei was friendly, with the air of someone who simply prefers the outdoors to city life. “I haven’t been to Manhattan in a long time. I used to live in New York. Went to college there.” A one time electrical engineer, he now lives in one of the old worker’s homes, which dates to the 1840s. “My favourite thing is the hiking and the quiet. Not only do you have the Reservation here, but the parks connect with each other.” Today, Feltville in undoubtedly eerie and somewhat sad. Walking along the once picturesque streets, one has a sense of the high hopes David Felt had for his model village, that came to ruin. Part The Hills Have Eyes, part Centralia, Feltville is quiet except for the occasional hiker, or local family walking the nature trails, the old abandoned homes looking down on them from the bluff. At weekends the former church, which Felt once made his villagers attend, is open as a visitor centre, telling the storied history of the Deserted Village. The school, paper mill, and Felt’s mansion itself have long since disappeared, but a dedicated group has worked to preserve what is left. “The County has a plan”, explains Sergei. “Buildings 4, 7 and 12 are slated to be next to be preserved, but that’s been the plan for a long time. Everything depends on money.” Until then, Feltville remains just as it says on the map; The Deserted Village. That is apart from a few people and a couple of cats.

By Luke J Spencer, a gentleman explorer, our man in New York

Zaha Hadid’s only house finally completes in Russian forest
New photographs and a movie reveal Zaha Hadid's only completed private residence – a house in the Barvikha Forest near...
70 Me gusta

Living the High Life at the Mushroom House
Peering out of the tree-tops in Pittsford, New York is a collection of pods whose aesthetic falls somewhere between Alice...
55 Me gusta