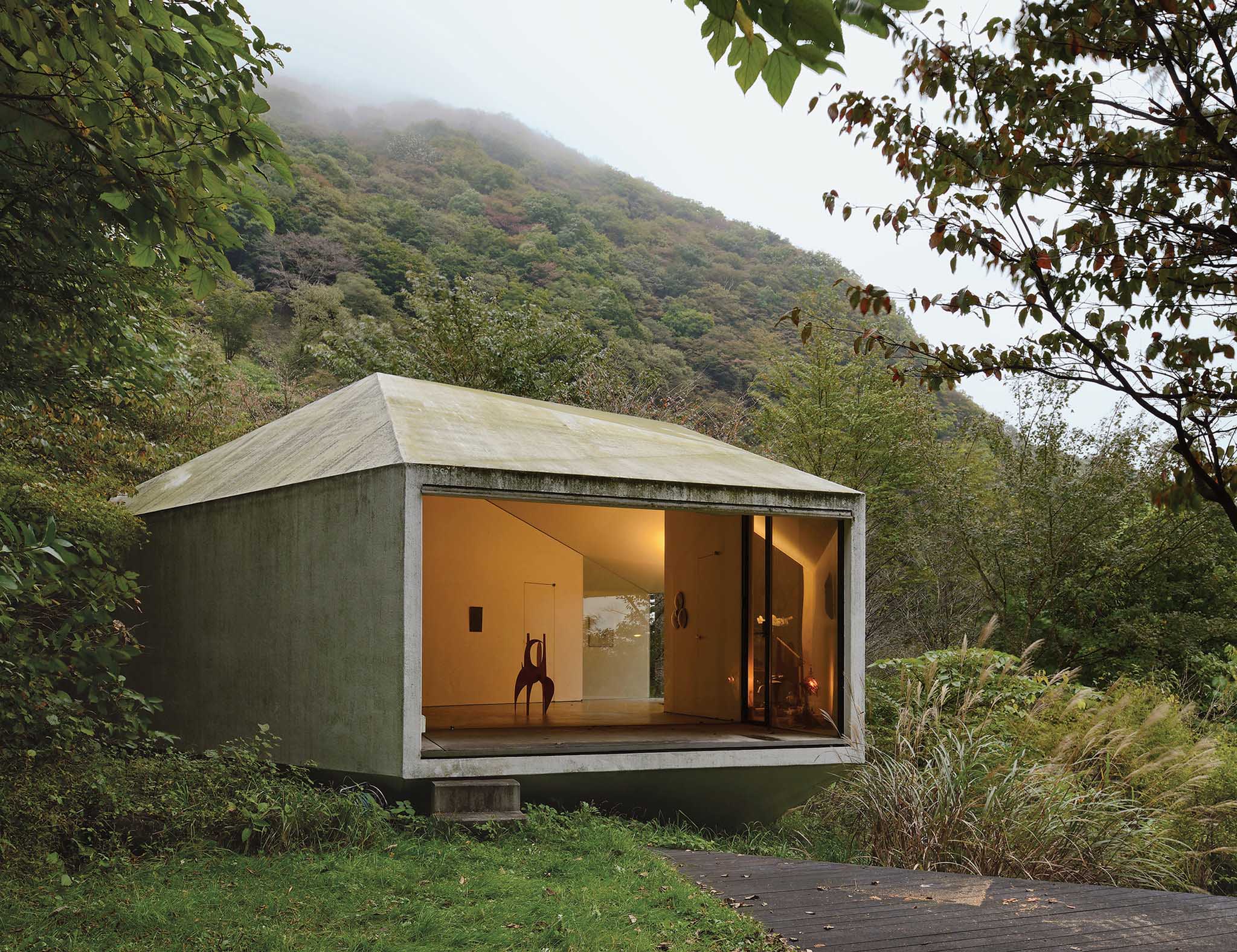 THE MOUNTAIN TOWN of Karuizawa is about an hour’s train ride northwest of Tokyo, a journey that zooms past the small, heartbreaking scenes of beauty that any traveler here knows, an endlessly repeating pattern of fragile persimmon trees, their unlovely black branches sagging with dusty orange fruit; splintered wooden torii gates, their vermilion paint bleached to a fleshy pink; tin-roofed factories and squat apartment buildings, their patios hung with laundry.

One expects Karuizawa to look and feel the same as all the other villages on the route, but despite its totems of contemporary Japan — the tidy, utilitarian concrete train station; the ubiquitous bright-lit convenience stores selling ice cream and compression socks — it feels not of Japan, but of elsewhere: a pretty, bourgeois commuter’s hamlet in central Europe or New England, the kind of place where a character in a John Cheever story might disembark on a Friday evening, his gray suit jacket folded over his arm.

This sense of geographical displacement is partly due to the relative un-Japaneseness of Karuizawa’s landscape — deciduous where much of the surrounding countryside is piney, and punctuated by hills instead of fields (there’s even a 10-trail ski slope directly behind the station). But it also has something to do with how the town has chosen to define itself: A self-consciously Alpine aesthetic dominates here, complete with snug, peak-roofed cottages, their white stucco facades adorned with wooden latticework. It is a Japanese dream of a particular kind of Western idyll, an idealized village convincingly radiating its own, sincere brand of gemutlichkeit. 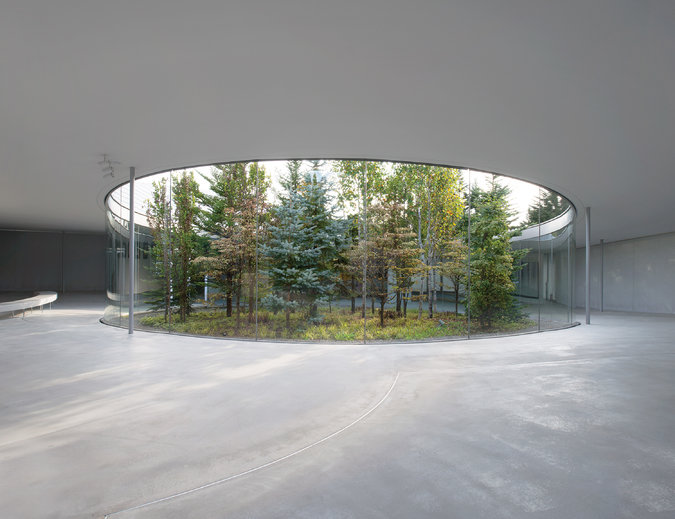 The Houses of Karuizawa

It has also been, for many decades, an escape for the rich and the royal, who come here in the summer to get away from the Tokyo swelter and in the winter to ski and to soak in the town’s many natural, mineral-rich hot springs. In 1957, the then-crown prince Akihito met the then-commoner Michiko while playing tennis here (she won); the imperial family still visits most summers. In the 1970s, John Lennon and Yoko Ono — who was, like Empress Michiko, the daughter of an old, wealthy Japanese family — spent months here as well. (More recently, it’s been rumored that Bill Gates is building a massive estate in town.)

The real curiosity of Karuizawa, though, is not its landscape nor its residents, but rather, its collection of spectacular avant-garde houses, most of them designed by prominent Japanese architects. There is Makoto Yamaguchi’s Polygon House, a quasi-Brutalist geode of distressed steel and glass that perches on a hill in a forest like an abandoned space pod; the concrete, glass and larch wood Omizubata N House by Iida Archiship Studio, whose dramatically steepled roof recalls an ancient Norse ship; TNA’s Passage House, where a horizontally oriented front entryway functions as a trap door, giving visitors the sensation that the forest floor beneath — over which the ring-shaped house hovers — is the ground floor of the structure, and the house itself its attic. Perhaps most splendid of all is TNA’s Ring House, a miniature tower deep in the forest constructed of alternating layers of wood and glass: In the evening, when the sky is dark blue and the house is lit from within, it appears as stacked slices of pure light, its bands of wood receding into the ink of the night. 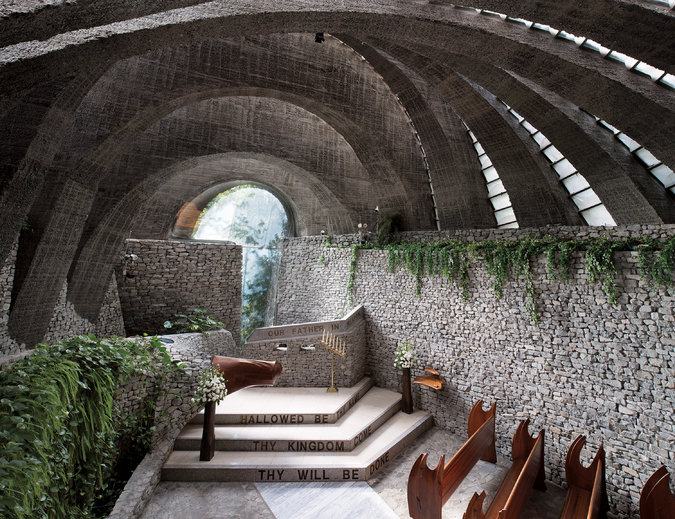 There is not a single right angle in the Hoshino Wedding Chapel’s cascading concrete arches and soaring interior of inlaid stone. Credit Photograph by Mikael Olsson. Producer: HK Productions

LOOKING AT THESE structures — there are around a dozen of them in a town with fewer than 20,000 inhabitants — one might wonder what, exactly, made Karuizawa such fecund ground for experimental architecture: After all, it’s not as if Larchmont or Kennebunk or Aquinnah (perhaps the town’s closest psychographic equivalents) are known for their forward-thinking buildings.

And yet to do so would be to forget how deeply encouraging Japan has always been of the strange, the weird and the experimental, especially when it comes to design. Not strange or weird in the lazy, clichéd way we in the West think of Japanese obsessions — the teenagers in their inventive, laborious streetwear; the cafes where waiters are dressed as robots or monsters or giant puff pastries — but strange in their acceptance of the uncanny, their fearlessness of novelty, their delight in anything that challenges them to see the world anew, their lack of cynicism, their desire to be dazzled. Japan, perhaps more than any other country, is a culture of deliberate appearances, a place where seeing is not just part of the experience of life, but life itself. Food is meant to please not just the palate, but the eyes as well; a cone of incense should be smelled, of course, but it should first be seen. Or to put it another way: There is a difference between self-expression and the expression of self. The latter, the right to say and act and behave as we want, is what we value in America. But Japan embraces the former, and that embrace is accompanied by a permission for a specific kind of deviance: For as long as you abide by the culture’s manners and etiquette, you can look however you wish. The society is greater than the self, but the self — its externals, at least — is yours to do with what you choose.

The same might be true for houses as well. Karuizawa is a wealthy town, but wealth here expresses itself not in sameness, but in difference, as if in recognition that one of the joys of having money is being able to use it to make something beautiful and unusual. And yet it’s also worth noting that though these Modernist houses are distinctive — the oldest of them dates to the early 1960s, when the country was on the cusp of beginning one of the most impressive infrastructural and economic postwar comebacks in history — they are also rigorously humble. And in this way, they are not Modernist at all. These are houses that are made not to disrupt or overwhelm their surroundings, but to — sometimes literally — reflect them. (Even Frank Lloyd Wright’s structures never receded as elegantly as these do.) They are in union with the forests, with the hillsides, with the trees, and although their materials may be of this century, their intentions are as old as Shintoism, Japan’s native religion and governing ideology: that every stone, every tree, every flower, is possessed with kami, a divinity. The society is greater than the self, and here, the society is comprised not of people, but of trees and rock. What at first appears to be rebellion is actually homage. It is a town full of reminders of what architecture can do: Instead of removing us from the land, it gives us a window to see the earth below — and returns us to it. 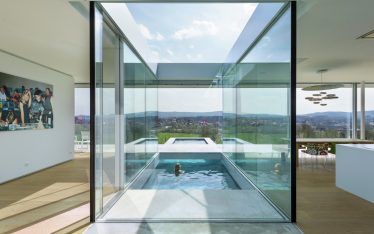