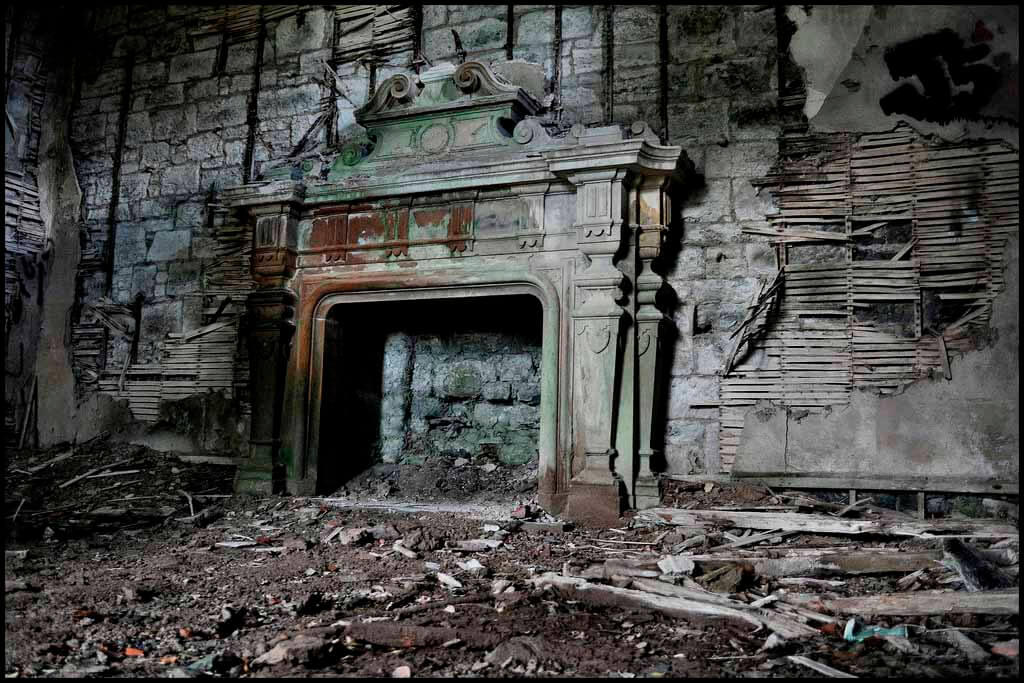 She’s been asleep for over half a century. Cocooned by a forest, half swallowed by nature’s encroaching fingers. A forgotten castle in the Scottish Highlands, waiting for its story to continue or find an ending. Such places do exist, you just have to be curious enough to find them. So you want to know where it is. Locals in Stirlingshire, Scotland know her as Buchanan Castle. She’s the elephant in the room in their quaint country village. Built in 1852, the castle was commissioned by James Graham, 4th Duke of Montrose and it became the home for the Montrose family, and remained as such until the 1920s. James’ father was the 3rd Duke of Montrose, the man responsible for the persuading Parliament to remove the law forbidding Scots to wear tartan and the traditional highland dress. It remains the seat of the Clan Graham to this day. Buchanan Castle in the 1890s

The Montrose family owned the castle until 1925 when it was sold and opened as a hotel in the 1930s with a golf course. The outbreak of World War II delayed further plans for residential development on the estate, at which time the house was requisitioned as a hospital. Rudolf Hess, a prominent politician in Nazi Germany, appointed Deputy Führer to Adolf Hitler in 1933, was a patient at the Buchanan castle’s makeshift hospital in 1941 after he flew solo to Scotland in an attempt to negotiate peace with the United Kingdom. He crash landed his plane, injuring his foot and was taken prisoner, convicted of crimes against peace. He was sentenced to serve a life sentence until his death by suicide. Hitler had ordered the German press to characterise Hess as a madman gone rogue when he realised the blundered mission might leave his allies, Italy and Japan, suspicious that the Führer was trying to secretly open peace negotiations with the British. After the war, the building served briefly as the Army School of Education and in 1954 the roof was removed from the house and outlying parts of the building were demolished. Removing the roof of a house would deem a property uninhabitable by the government and avoid the burden of taxes on a house that was no longer wanted. A number of residential buildings were subsequently built in the castle gardens and grounds. As recently as 2002 and 2004, redevelopment proposals were put forward for the category B listed building to be restored and turned into residential flats, but those plans were refused. The castle is currently included on the Buildings at Risk Register for Scotland. Many of the walls of the house remain intact to their full height and are considered to be in good condition– as long as you don’t count the fact that they’re being engulfed by nature like a Mayan ruin. Surrounded by a fence (with a considerable amount of human-sized holes to squeeze through), Buchanan Castle’s scale is something that can only be understood first-hand. Its ruins are nothing short of a haunting maze. Room after room, hallway after hallway, losing your way is too easy. Enter at your own risk and explore responsibly and respectfully.