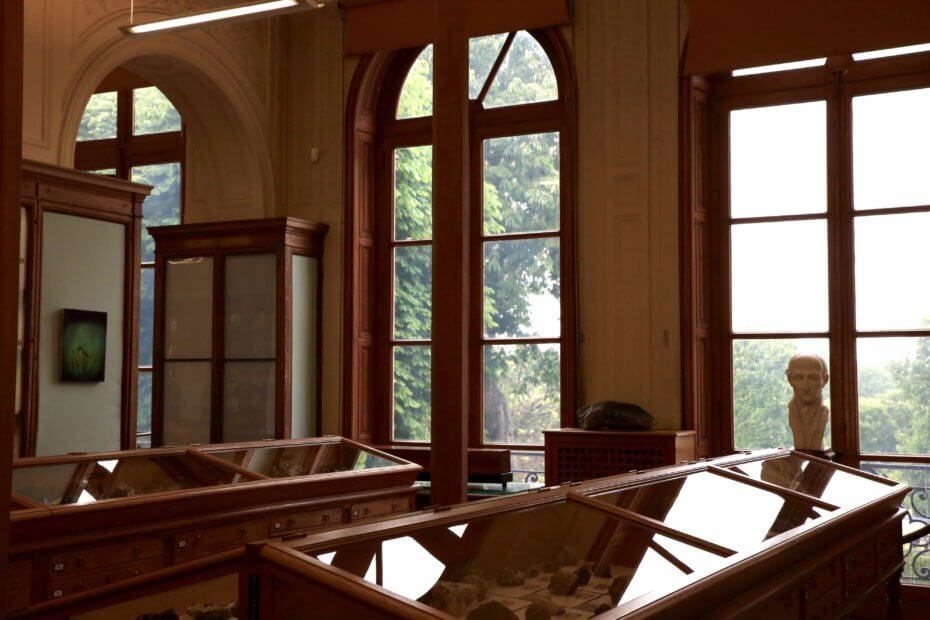 “Take the right hallway to the staircase, which will take you to another staircase, that will lead you to a doorbell on the first floor” – the exact instructions to finding the Museum of Mineralogy tucked away in the university of MINES Paris Tech. Paris hides one of its most inspiring cabinets of curiosity behind university walls and private doors, yet it’s completely accessible to the public in the Luxembourg Gardens.

On an exceptionally rainy afternoon, we were still the only ones in the museum along with the 4,000 specimens on display out of 100,000 that belong to the museum. Specialists in the field consider this one of the most exceptional collections in the world dating back to the 19th century. These cabinets hold  diverse minerals, rocks, meteorites and gemstones. The entire collection is organised alphabetically down two paths of cabinets. A exquisite library of minerals; if there is any rock you must really see for whatever reason, it’s definitely here.

Rocks, rocks and more rocks with names I cannot even try to pronounce, fill up each cabinet in an endless spectrum of colours, shapes, and textures. A Pyrite from the Navajun region in Spain caught my attention almost immediately. In its natural state, this specimen forms cubes with ideally smooth surfaces… Cabinets in the dark rooms exhibit a glow party of rocks. The colours of these are so vibrant that no extra lighting is necessary in these rooms. Without warning, one then finds themselves in the section for gems– but these are not just any regular gems, they’re the gems of the French royal crown. Their history begins in 1530 when the King François I began collecting them as a show of wealth and as an investment. Under the third republic of France in 1887, in order to rid itself of all symbols of the monarchy, the jewels were sold and dispersed, never to be reunited again. A small portion of them however, was spared and donated to three institutions: the Louvre Museum, the National Museum of Natural History, and the University of MINES– under the pretext that they would not be used as experimental specimens by the school’s students.

Where were these royal gems hiding for over a century? We can only speculate that they were kept in the drawers of the old wooden cabinets that still lock away a greater part of the museum’s collection. In 2016, the royal gems were finally added to the permanent exhibit of the museum, which President François Hollande himself visited. The purple amethyst from Siberia and Brazilian rubies (pink topaz) on display were used to ornament the crown jewels of Empress Marie-Louise. The pièce de resistance however is the collection of Colombian emeralds, used on the coronation crown of Napoleon III. An afternoon date with minerals and gems? Voilà. For more information on the museum collection, visit here.

Welcome to one of the Last Cinema Prop Houses in Paris
Alright, you can forget about all those other times, this time, I really did find Paris’ best-kept secret. It’s taken me almost...
45 Me gusta